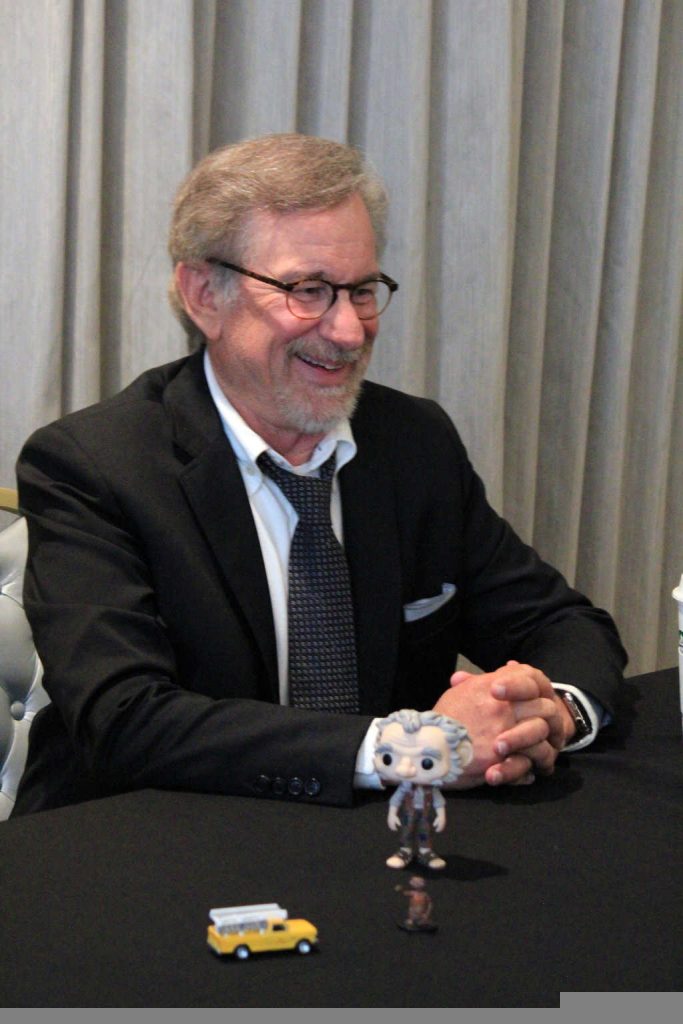 I got the opportunity to interview Steven Spielberg. I can honestly say this interview was a bucket list item for me.  The number one question I have gotten since I’m home was “how was he”. Well, first I get how was your trip. Then everybody seems to ask about Steven. I can honestly say I loved him. He is as nice as he looks. When we would ask him a question, he would give the asker eye contact throughout his answer. For me, that is huge. It shows that he values your question, and that he doesn’t think he is any better than anyone else in the room. I find that impressive. His demeanor towards Ruby was amazing also. (We interviewed both Steven and Ruby at the same time. Ruby’s interview can be found here) You can just tell that he takes everyone under his wings and makes them all better in what they do. He is definitely a kind soul. Our first question that we asked Steven was about why he chose Ruby Barnhill to play Sophie.

I believe in fate, and I really believe that we saved the best for last.  We were casting for eight months and had not found Sophie yet.  Nina Gold saw a couple thousand of qualified young people – both unknowns and working young actresses.  I was not giving up hope that I would find her, but I was starting to look at my third and fourth and fifth choices to accommodate people I had seen who I had liked but hadn’t reached my heart yet.  I was about to compromise when all the sudden I saw the audition that Ruby Barnhill and her parents had sent in to Nina Gold.  My whole life changed for the better.  Everything was okay with the world at that point. When you see statements like that, you know that person loves what he does. He is also darn good at it too when he can spot talent like that.  He went on to tell us:

Even this many months later, you could still hear the excitement in his voice when he was telling us that story.  Another really cool thing that Steven Spielberg did was cast Ruby’s dad in the film!  (SPOILER ALERT:  The scene where BFG first enters the palace and he’s on his hands and knees crawling, and there’s a guy guiding him saying slow ahead and okay, hard to port — that’s Ruby’s dad, Paul!) 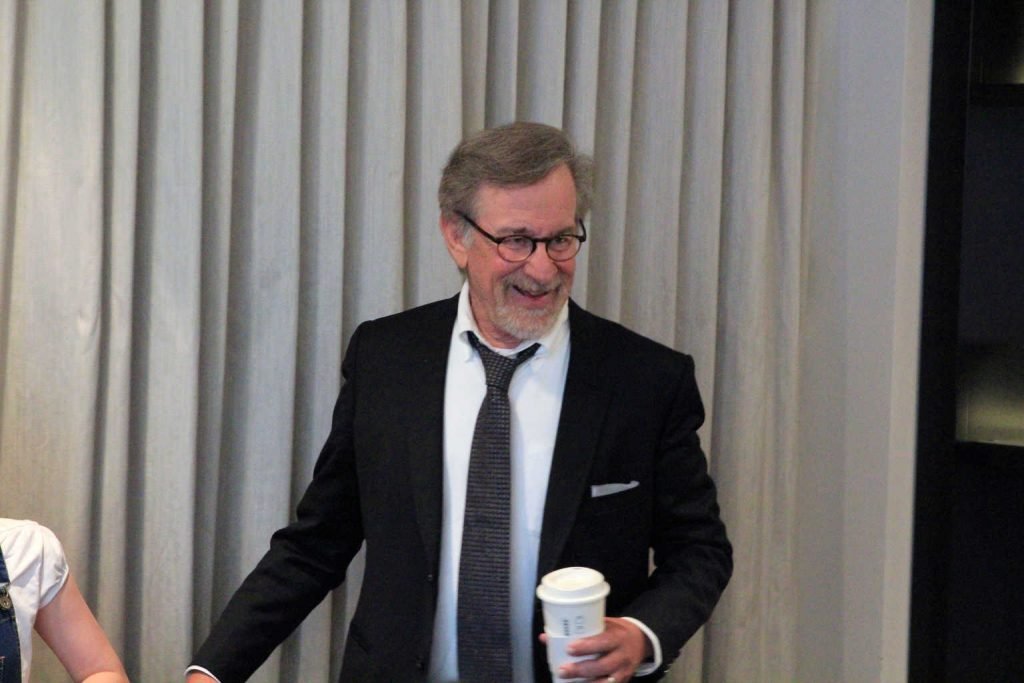 Another cool thing we learned was that on set there are no such things as mistakes.  Instead:

I call them happy accidents, because sometimes they wind up going into the movie. 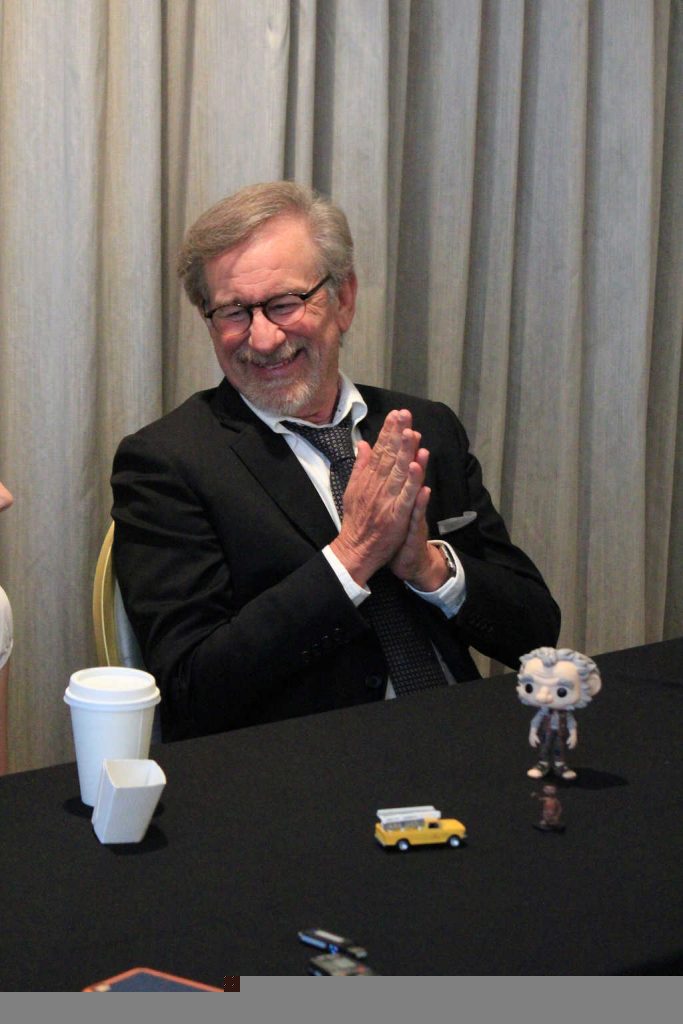 We then asked him about how it feels that with The BFG that he is reaching another generation.  His answer:

I think of it in a way as having a very, very, very large extended family.  I didn’t even understand when I was first starting out making movies about the power that film has.  I wasn’t really appreciative or even aware of the outreach of cinema until I was actually older.  I thought Jaws was just a freak of nature and would never happen again.  When ET suddenly happened and lightning suddenly struck twice, I realized that cinema outlives the filmmakers and becomes a part of the extended family of people from all walks of life who speak different languages and believe in different things.  Sometimes movies come along that make you see the same thing with the same feeling.  It doesn’t matter what languages we share or who we are and what our backgrounds are, sometimes a feeling can be communicated all over the world without any signage.  That power that film has is something.  It intimidates me, and I respect it a lot, but it also scares me, because it’s pretty awesome when that happens. 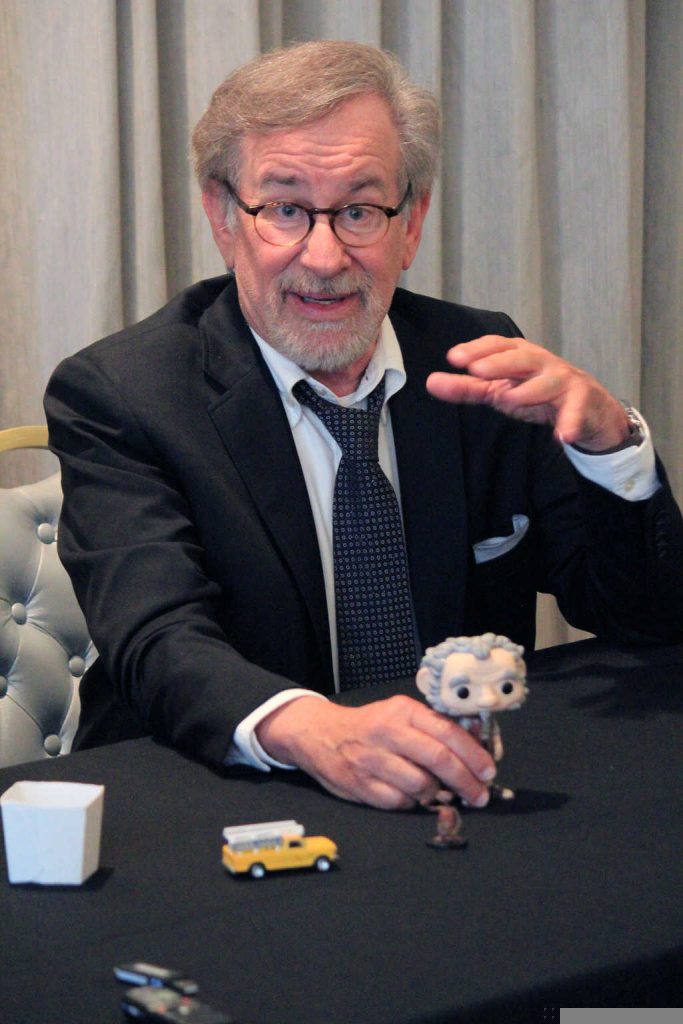 Steven also talked about making a movie under the Disney company which he has never done before as filmmaker:

I had never made a movie under the Walt Disney name as a director before.  I don’t know why, because Disney had been in my life for a number of years releasing some of our DreamWorks films over the last six or seven years.  The other thing was that Disney had such a profound effect on my childhood, because I was raised in the world of Walt Disney.

His movies scared me to death, thrilled me to pieces, and made me laugh and made me cry.  I never cried in a movie before I saw Bambi .  My parents took me to see Bambi in a reissue.  Eight minutes into the movie, you know, they kill the mom, and I’m sitting here crying my eyes out.  It also redeemed itself in the time span of the movie and that was a powerful time in my life.  Then Mickey Mouse Club came on television and I was an extended Mousketeer. I was like millions of kids who watched TV back in the ‘50s and wanted to be Mousketeers.

To finally make a movie that has Disney’s name on it, I’m so proud when the film begins and the castle shows up — and my movie follows the castle.

It is really at this point of the interview that you realize how human Steven Spielberg is.  That last statement will probably stay with me forever.  You could see and hear how proud he was of that.  He then added:

That’s something I’ve been waiting for in a way all my life, and, and through BFG and through Roald Dahl’s genius I got the chance to do it.

If you haven’t seen the trailer yet, here it is:

We asked Steven about his favorite scenes:

Any time they were in any kind of conversation, all those scenes were my favorite scenes.  (He gave us some examples here but I don’t want to spoil the film!) 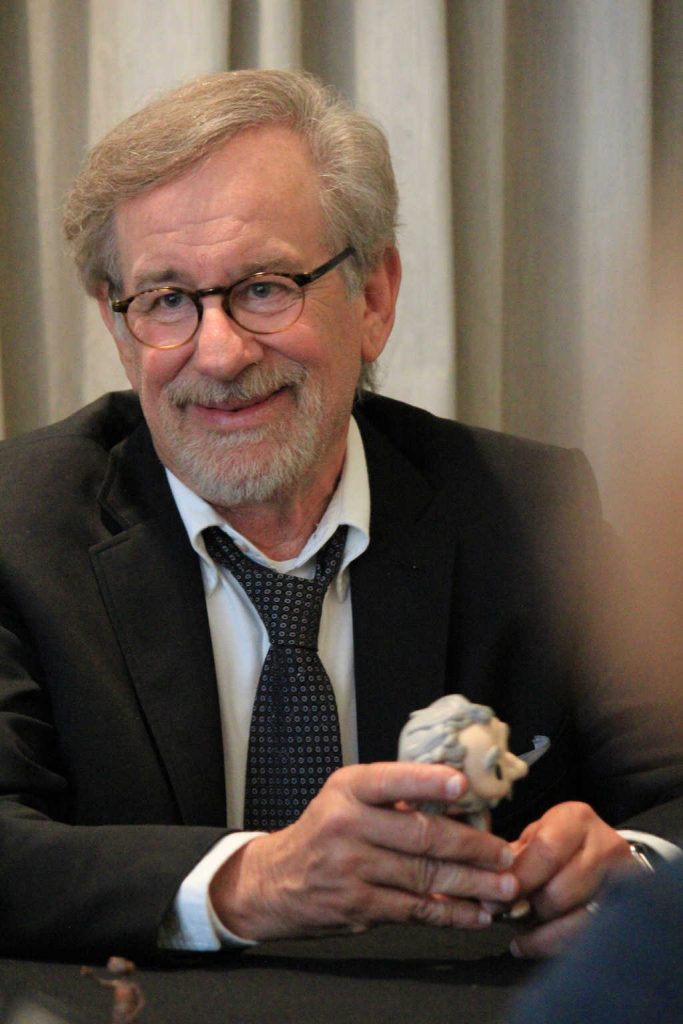 The next question was one I got to ask.  I had asked on my Facebook page if anybody had a question I should ask Steven and one of my son’s classmates wanted to know why he chose BFG.  I am so proud that I was able to ask that for her.  Here’s his answer:

Well, I had read it to all my kids.  That’s why I chose it, because I was very familiar with it, because I am the first BFG that ever spoke those words.  Of course, I’m not.  Every parent thinks they’re the first to play BFG.  It’s really great when the dad reads BFG in BFG’s voice to, to his daughters.  I have four daughters and three sons.

I bonded with it a long time ago back in the late ‘80s.  When Melissa Mathison, who had written ET for me, adapted the Roald Dahl’s book into a script, I fell in love with it all over again.  That was the first time I saw that it could be a movie.

I have to admit that is such an amazing answer.  Our last question was what did he want this generation of kids to get out of BFG.  This answer also amazed me:

As you can see, we had an absolutely amazing time with this interview. I would love to sit down and talk to him again.  Make sure you go see BFG on July 1st!!! 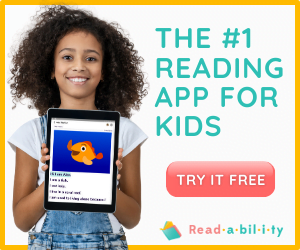 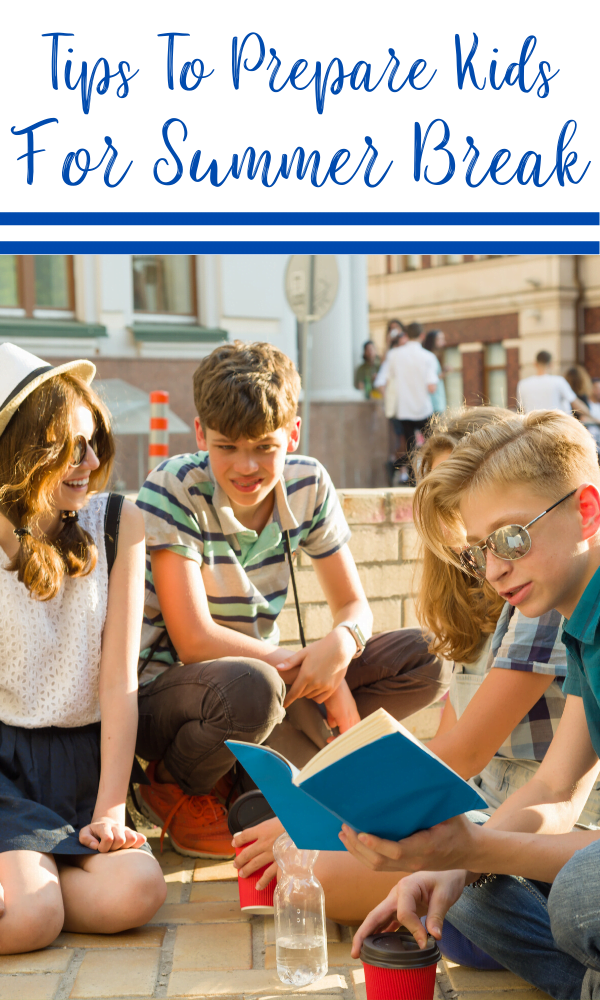 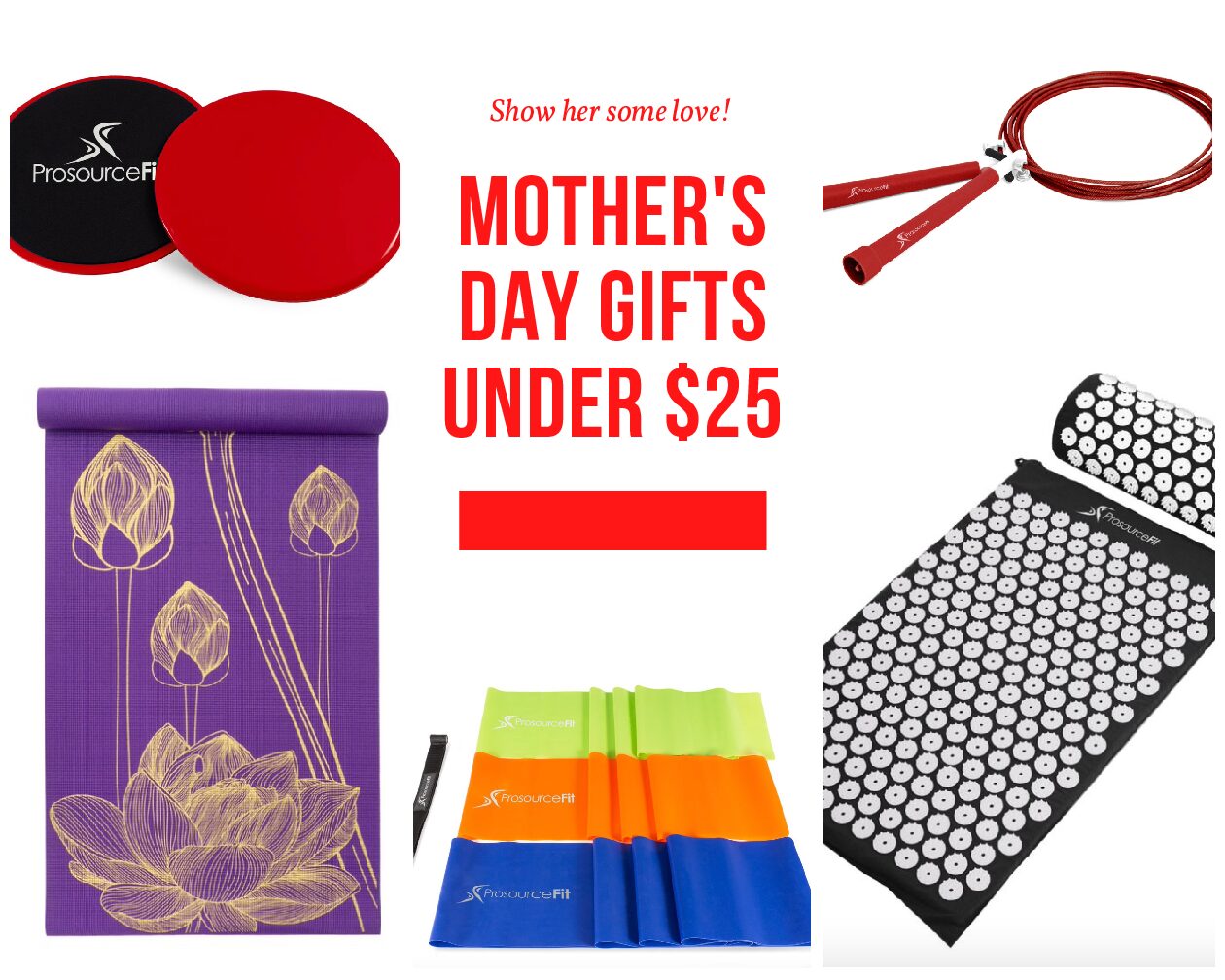